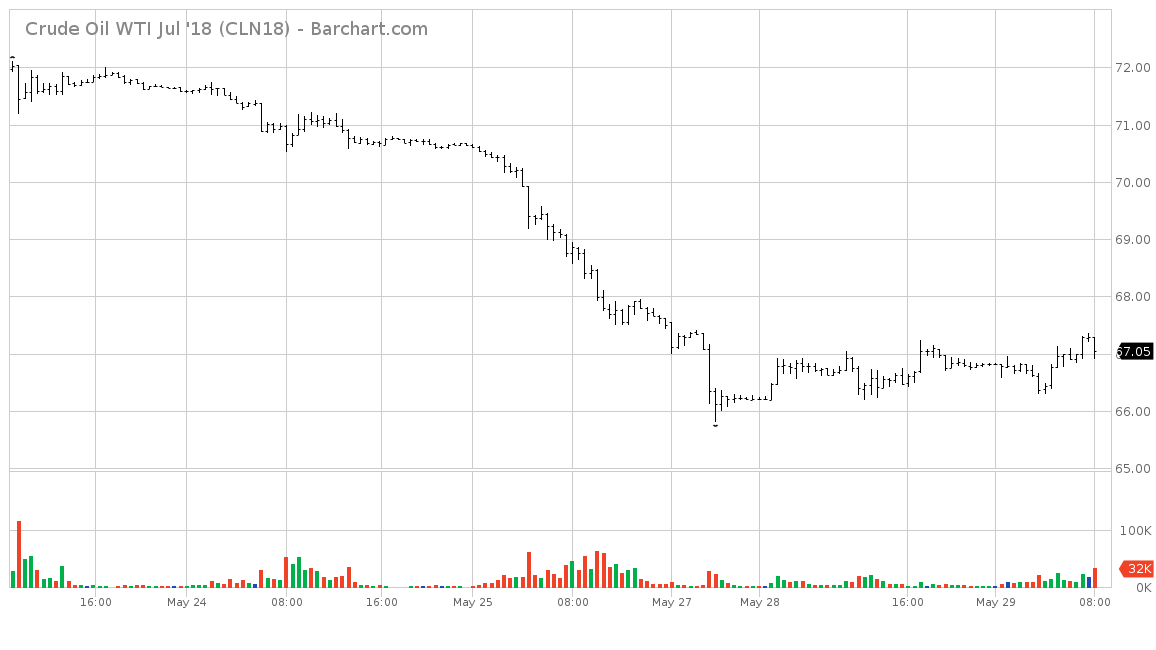 On May 22nd WTI Crude nearly reached $73 / barrel and since then prices have dipped almost 10%.

Today, WTI Crude continues its downward trend as Russia and Saudi Arabia continue discussion about the possibility of boosting supply by a combined 1 million b/d countering the output losses from Iran and Venezuela.   The Organization of the Petroleum Exporting Countries (OPEC) is due to meet in Vienna on June 22, however it is uncertain any agreement could reach conclusion on that date.

In the meantime, United States crude production continues its upward climb, further putting pressure on OPEC and Russia.   Record crude oil volumes from the United States are expected to be exported to Asia, which is a direct hit on market share of OPEC and Russia.  U.S. oil production has increased by more than 27 percent since 2016 to 10.73 million bpd. That means the United States has surpassed Saudi Arabia and is closing in on Russia, which pumps about 11 million b/d.

So, what do those in the market make of the potential crude production increases?

Goldman Sachs Group does not view the possible production increases as a bearish signal and continues to see the current decline as temporary.   The thinking is a boost of 1 million b/d in production would only offset involuntary production declines.

Julius Baer’s Norbert Ruecker is not as optimistic as he looks beyond the near term.    “The oil market has moved from ample to tight supply in recent months due to strong demand, Venezuela’s supply collapse and the petro-nations’ production restrictions. Where the balance is heading going forward largely depends on political factors,” he said in a note.

“High uncertainty clouds the short-term outlook and we maintain a neutral view. In the medium to longer term, we still see oil prices falling as indicated by the downward-sloping futures curve. Our ‘low for longer’ view is deferred, not refuted.”