Crude oil prices have been on a tumultuous ride for the past month, but is the worst behind us? 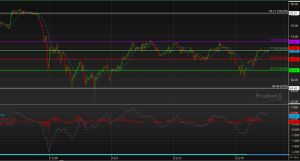 We first learned of the Omicron variant in South Africa on Thanksgiving Day, and when financial markets re-opened on black Friday, the oil patch was terrified. As you can see in the chart above, WTI crude oil plunged $10/barrel in one day as the world wasn’t ready for a highly transmittable variant. As we began to trade through the month of December, let’s review the technical price action and combine it with fundamental analysis to anticipate where we might go from here.

In the first week of December, we started to see a bit of a relief rally as the market was extremely oversold. Moving into the second and third  week of the month, you will notice that WTI was hugging and trading around the $71.39/barrel level – this was a 50% Fibonacci retracement level from crude’s peak to trough in the selling period that took place after the discovery of Omicron. What is a Fibonacci retracement you ask? It is a mathematical relationship of ratios from low support levels and high resistance levels in order to provide retracement levels of a price movement. Basically it plots where the price can go to fill in the gaps of big moves.

Crude hung around that level until we got some clarity from the Federal Reserve (FED) decision which occurred on Wednesday December 15th. The FED decided to speed up its tapering of bond purchases and forecasts three interest rate hikes in 2022. Basically, it is going to start buying less bonds and subsequently put less liquidity in the market and then raise interest rates by 0.75% by the end of next year. Once the market digested this by December 17th and rotated portfolios around, the tech-heavy NASDAQ stock index with very high valuations started selling off. It sold off because higher interest rates make it more expensive for these companies to grow. These companies do not particularly have earnings and thus fund managers do not want to invest as much there when interest rates rise. This drawdown had a spillover into the oil market as managers were selling everything contributing to oil’s decline.

Now let’s transition to where we are today. The Department of Energy (DOE) reported that crude inventories, (excluding the strategic petroleum reserve release – which is baked into the market already) drew 4.7 million barrels, gasoline built 5.5 million barrels, distillate built 0.4 million barrels, and oil production declined by 100,000 barrels per day to 11.6 million barrels per day. Despite the large gasoline build (which is not surprising as we get into mid-December and many people have decided to work from home to stave off Omicron before the holidays), this is a neutral to bullish report. Speaking of Omicron, we are getting more reports that this variant is not as severe as Delta but has a higher transmission rate. Fully vaccinated people are still getting it but the symptoms are primarily mild. Dr. Hugh Cassiere, director of critical care services for Sandra Atlas Bass Heart Hospital at the North Shore University Hospital on Long Island, New York hinted that this variant appears to be more like bronchitis and not pneumonia. “Usually patients with acute bronchitis tend not to be short of breath. They tend to cough and produce sputum. Patients with pneumonia tend to be short of breath and feel more fatigued than bronchitis in general.” Therefore, the absence of being short of breath leading to lung issues which we see with the Delta variant, may have traders looking past this variant a bit now.

With all that being said, let’s go back to the chart. At writing, WTI is trading $71.80/barrel. You can see that is above the $71.39/barrel retracement line we mentioned earlier. Also, it is trading above the $71.38/barrel moving average. If we have  closes today and tomorrow above those levels, it is possible that oil has seen its temporary lows for the time being, putting that $78/barrel number back into the picture as we head into 2022.