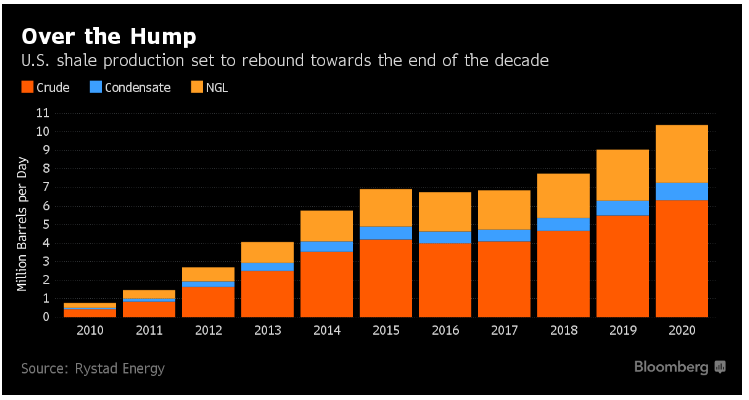 Yesterday’s oil market saw its winning streak extend to seven days, the longest in four months, as crude prices finished the day up slightly to settle at $54.06 per barrel, its highest level in 17 months.  RBOB also finished the session higher by $0.0218 to close at $1.6746 while HO was down slightly by $0.0001 settling at $1.6993.  The recent surge in crude can be attributed to the market’s continued reaction and anticipation of OPEC and non-OPEC producers cutting output to reduce or eliminate the current supply glut.

With the price of crude climbing, OPEC’s challenge in 2017 will be to limit the shale industry as much as possible thus preventing increased supply and downward price pressure.  As was reported on Bloomberg.com, oil market analysts are predicting that the agreed upon OPEC and non-OPEC cuts could result in prices averaging $58 per barrel which will lead to further U.S. shale rigs coming back online.  As one analyst for Citigroup stated, “OPEC is aiming for a much-needed lift to the oil price, given the stretched fiscal balance sheets of every producing nation.  The question really should be what happens afterwards – how fast is U.S. shale going to come back?”  Already since May of this year, U.S. drillers have added approximately 200 rigs.  Skepticism continues to remain however on whether the oil producing countries will live up to the pact reached late last month.  Also, as was part of the OPEC agreement, Nigeria and Libya are exempt from production cuts.  What remains to be seen is how much of their increased production will offset the others’ cuts.

This morning, the weekly DOE stats were released, one day later than usual due to the Christmas holiday.  U.S. crude inventories saw a build of 600,000 barrels, while gas and distillates saw a draw of 1.6 million barrels and 1.9 million barrels respectively.  Currently, crude is trading down while the refined products are mixed with heating oil up less than $0.01 and RBOB down $0.0032. 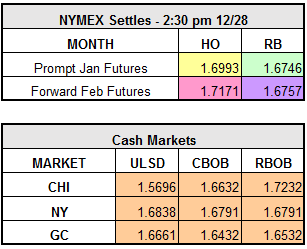