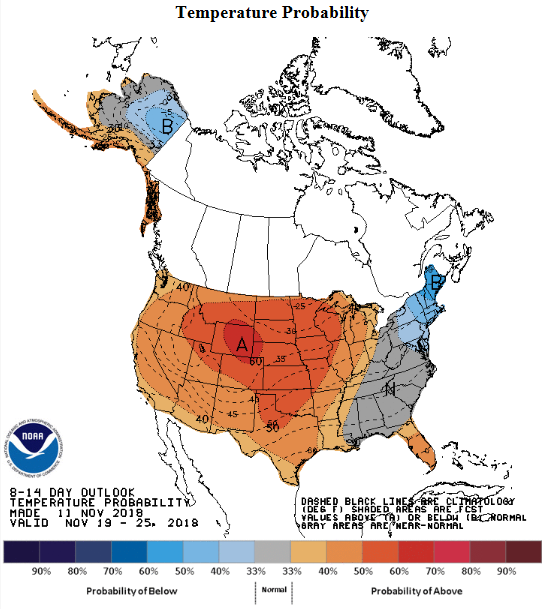 Reuters reported Monday that Saudi Energy Minister Khalid al-Falih said OPEC and its allies will need to cut around 1 million barrels per day from October’s production levels beginning next year to overcome the crude oil oversupply situation. This comes a week after the U.S. granted waivers to its allies to purchase Iranian oil which helped perpetuate the incredible sell off we’ve seen in oil prices over the past few months, with WTI down about 20% from its October high, last trading at $61.09/barrel.

Verbage coming out of OPEC is expected when we see such a windfall in prices, but the commodity space in general is facing a headwind. The dollar index last traded at $97.17, near its 2018 high of $97.60. Currency traders are fleeing to the dollar as a safe haven as there continues to be Brexit uncertainty hindering the euro and sterling. Additionally, the Federal Reserve’s comments last week point to a continued path of increasing interest rates. Most likely in December and then again 2-3 more times in 2019. Therefore, despite any OPEC rhetoric to cut oil supply, which tends to happen on every substantial pullback in prices, a rising dollar may put a cap on any gains.

Natural gas prices have soared over the past two weeks with December Henry Hub Natural gas hitting $2.907/dekatherm earlier today. Prices have risen almost 20% since November 1st as the U.S. was hit with an arctic cold front over the weekend, sending temperatures lower and the need for natural gas surging. The NOAA 14 day weather forecast, pictured above, continues to predict colder than average temperatures for the East Coast which keep heating demand higher than normal. This could have an effect on diesel prices and availability as coal and oil-fired power plants may be called on to keep us warm.