Ineos may have just put solid resistance in oil prices. The pipeline operator said yesterday it is expected to complete repairs at the end of this month on the Forties pipeline in the North Sea. It will begin a gradual restart to the 450,000 barrel per day crude oil pipeline and return it to normal shipping rates early next month.

The Wall Street Journal accurately sums up that crude prices have risen 20% since September. It really has been the perfect storm for the bulls. Fundamentally, we have seen global oil inventories decline. U.S. crude oil stocks now stand at 436.5 million barrels which is 10% lower than last year. OPEC has been successful this fall in extending their production cut through all of next year, pending a review in June. There’s been a return of strife in the Middle East. Saudi Arabia has been blaming Iran for providing Houthi rebels with missiles which have been fired at the Saudis. These are two of OPEC’s largest oil producers and any provocation increases the chance of a disruption in oil production. Finally, we had a leak in the Keystone pipeline and a crack in the Forties pipeline as the icing on the cake, but as noted above, conditions will soon be back to normal. This may be the first kink in the bulls’ armor which is causing analysts to be bearish crude in the first quarter of 2018.

Brent crude oil currently trades around $64/barrel and multiple analysts have lower price targets in the next three months. It is a function of all the bullish news we’ve had being baked into the market already, coupled with the fact that demand is expected to seasonally fall off for crude oil. JBC Energy is expecting a modest decline to $61/barrel. However, BNP Paribas and Commerzbank have much lower forecasts at $55/barrel and $53/barrel, respectively.

Guttman Energy wishes everyone a safe and happy Holiday season! 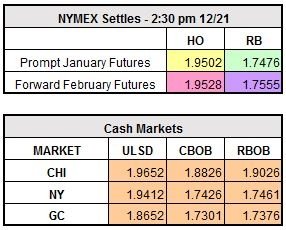