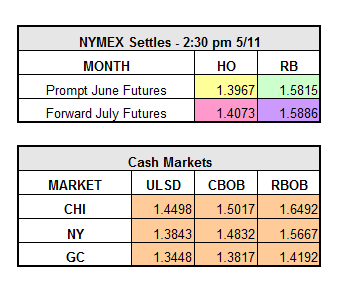 With the return of some Canadian oil sand production, the market is currently trading down about a cent and a half, respectively, on both HO and RBOB. Yesterday we saw another rally after the release of EIA data, which contradicted the API expectations of a 3.5 million bbl build. The EIA data showed a fall in crude inventories of 3.4 million bbls (representing the first draw in six weeks), a 1.2 million bbl draw in gasoline stocks, and a 1.6 million bbl draw in distillates. Cushing, however, had a build of 1.5 million bbls. Refinery utilizations were also down 0.6%.

With crude inventories still in the 540 million bbl range, gasoline and distillate demand over the next several months will determine how hard refineries work toward putting a dent in the crude surplus. The monthly Oil Market Report from the International Energy Agency (IEA), released this morning, anticipates global oil demand growth for 2016’s first quarter up to 1.4 million-b/d, led by strong increases in India, Russia and China.

There are several global factors impacting current bullish conditions. Capricious supply stoppages in Nigeria instigated by militant attacks on the country’s oilfields have caused production to fall from 2.2 million bbls a day to 1.68 million bbls and have significantly disrupted exports. The wildfire that affected oil sands in Alberta, Canada last week impacted about 1 million bpd of production. Political standoffs in Libya have blocked access to a port in the country, resulting in a temporary reduction in exports. These three influences have now added up to about 3.5 million bbls/day taken offline.

The IEA is anticipating a supply/demand rebalance during the latter part of the year with a “dramatic reduction” in the growth of oil stockpiles. The agency is expecting that during the first half of this year stockpiles will increase by 1.3 million bbls/day, and will fall by 200,000 bbl/day later this year. World oil demand this year is projected to increase by 100,000 barrels a day to 95.9 million a day. With Canada’s oil sands reducing output, the agency further decreased its estimate for 2016 non-OPEC supply by 100,000 barrels a day. With U.S. shale producers putting further pressure on oil prices, the IEA expects non-OPEC output will drop by 800,000 barrels a day this year to 56.8 million a day.