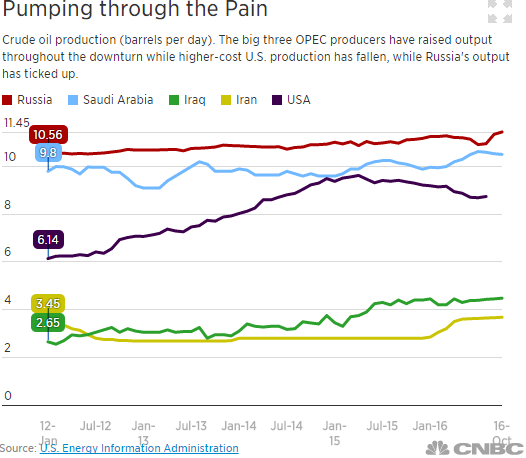 The wait is over for the OPEC decision.  Now the wait begins for actual OPEC action.  Yesterday in Vienna, the oil ministers of OPEC came to an agreement, its first in eight years, to cut oil production by 1.2 million barrels per day.  This will bring total output down to approximately 32.5 million barrels per day.  In addition, non-OPEC producers including Russia are expected to contribute an additional 600,000 barrels per day to the total reduction.  As a result of the OPEC deal, prices across the board closed significantly higher.  Crude settled up $4.21 to $49.44 per barrel while refined products RBOB and heating oil finished at $1.4825 per barrel and $1.5763 per barrel respectively adding ~ $.1000 each from the previous settle.

Now come the challenges of monitoring that cartel members will abide by the agreement and keeping crude prices in a range that both boosts oil-producing countries’ economies while keeping non-OPEC members from ramping up production.  Typically, non-OPEC producing countries see rig counts increase as crude gets to the $50-$55 per barrel dollar range.  This possibility could offset some of the planned reduction.  Another question that remains is how Libya and Nigeria will react as they are exempt from yesterday’s OPEC announcement.  Some see them continuing to increase production also taking gallons away from the grand total.  Many analysts are projecting oil prices to continue to rise short term with the skepticism remaining on how effective the cuts will be.  Kuwait, Venezuela and Algeria have agreed to monitor compliance with yesterday’s agreement.  “It’s going to take time to see who’s going to abide by those rules” said one trader as quoted in Bloomberg.com.  Another analyst stated that “while prices may climb further in the very near term, we expect any gains will be short lived, with U.S. production likely to ramp up to exploit higher prices.”

With the OPEC news dominating the market, the weekly EIA stats had minimal impact.  U.S crude stockpiles dropped 884,000 barrels versus expectations of a 636,000 barrel increase.

This morning all indexes continue to rise as RBOB and heating oil are both up over $.0700. 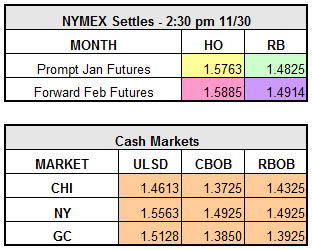