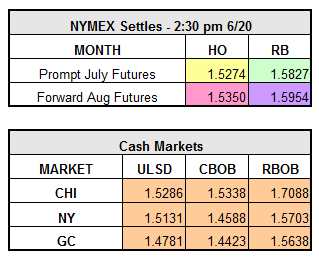 The market is retreating this morning after a 10.5 cent rally on HO and an 11.7 cent spike on RBOB the past two trading days, currently trading down 3 cents on refined products, respectively. Yesterday, HO advanced $0.0457 to $1.5274, and RBOB gained $0.0774 to $1.5827. July WTI crude finished up $1.39/bbl to $49.37. API figures are released today at 4:30 p.m. EST; a drop in crude inventories (1.9 million bbls) is expected for the fifth consecutive week, and a draw in gasoline is also expected due to an anticipated increase in demand over the 4th of July weekend. If Wednesday’s DOE statistics confirm expectations, we could see further support to the $55/bbl range.

While prices do seem to be stabilizing, Chicago continues to be the priciest gasoline market in the eastern half of the country, gaining about 7.5 cents yesterday. The last few weeks we’ve seen supply disruptions drive Chicago market gasoline prices to skyrocket, then plummet about 20 cents as refinery operations have recovered.

Three Gulf refineries, as well as ExxonMobil’s Joliet, IL refinery, have been experiencing equipment malfunctions, which if ongoing could lead to further supply issues. CA is also seeing diesel and gasoline jump on high demand due to hot weather and refinery problems.

Natural gas prices have jumped over 5% this week on higher temperatures across the U.S.

Will Britain leaving the European Union affect oil prices? Supply and demand have become more balanced, and besides risk aversion, there is no evidence that that Brexit itself could influence the supply/demand picture. Because a Brexit would incite risk relative to the current situation, general sentiment is that if Britain leaves, the market will fall, and if Britain stays, the market will climb. Regardless, sentiment gives oil speculators a motive to move markets, and because speculators believe Brexit will affect prices, it likely will. We do not expect this issue to remain at the forefront of commodity prices for long.