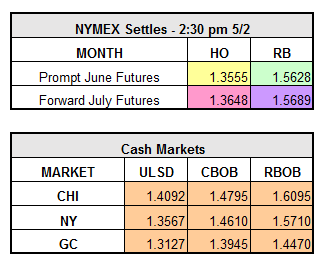 Currently, WTI is down $1.28, RBOB is down $.0565 and HO is down $.0233. Oil futures found further direction this morning as reports of weakening demand in China and the global supply glut are coming back to fruition. China, being one of the largest oil producers, as well as consumers in the world, is feeling some pain right now as ships are being forced to wait in long lines to unload crude at the ports. Why is this happening?

It all started with the independent refiners in China who are known as “teapots.” In 2015, these “Teapots,” were given permission to stock up on cheap crude imports while prices were at historic lows. The problem now is that they are importing more than they can consume and/or store in on-land inventory. If you couple the news about the world’s 2nd largest oil consumer (China) having weakened demand with the anticipation of increased OPEC production, sure could create a good opportunity for the bears to come back out to play.

Reuters came out with a story stating that China has suspended the release of output data on multiple commodities- this includes haulting production reports for gasoline, diesel and Kerosene. Some people may question the motive for why the Chinese want to keep this information under wraps. Is it really because they are “cracking down” on the illicit distribution of this type of data, or is there something else that they don’t want the rest of the world to know?…

The question at hand is: have oil prices hit a high point for the month of May? Those who say yes, are likely to believe that as oil prices continue to reach new highs for 2016, that drillers will start to come out of the woodwork, which will only send futures back down once again. As traders sell off some positions after as crude gained nearly 20% in April, it appears that we will have to sit tight and see how the market reacts.