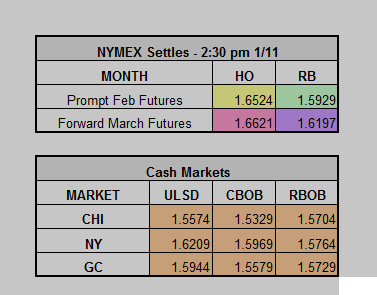 The DOE statistics may have been bearish yesterday, but other pieces of news seemed to steal thunder away from the data. The main event yesterday which aided a weakening dollar and a hike in oil prices, was President-elect Trumps’ speech (Keep in mind: there is often an inverse relationship between the dollar index and oil prices).  The other key piece of news yesterday, was one that many of us have been anxiously awaiting to hear an update on, “production cuts.”

The US Dollar index weakened yesterday by approximately 1.5 % from its highs. Not to mention, U.S. stocks had their worst start for 2017 and WTI Crude went up 2.8 %. Who is to blame?

Some wonder if the finger should be pointed at President-elect Donald Trump. Trump discussed many topics, but for whatever reason he did not make much mention of the economy. Instead, he focused on topics such as  U.S. spy agencies and pharmaceutical companies, in regards to how they partake in unethical practices.

The question at hand, is, why did the markets react the way that they did, if Trump did not discuss anything relating to the markets? According to Peter Cardillo, lead economist at First Standard Financial (NY), the fact that there was no mention of fiscal policy caused “a cautious mood in the equity arena,” which in turn weighed on the U.S. Dollar Index (DXY).

As of 12:06 pm, the NYMEX is up approximately 3 cents on Heating Oil and 2 cents on RBOB, while WTI crude is trading above 53 dollars per barrel. Why are we seeing some upside again today? If you take a look at the news regarding production cuts, you will see that most nations are honoring their commitments to cut production thus far.

To those of you who do not recall, in November, a number of different OPEC/ Non-OPEC members came together to find common ground on oil production, so that they could lessen the supply glut that has plagued the market for the last two years. These production cuts were set to begin starting January 1st, 2017.

According to BMI Research, there is currently a compliance rate of 73 % for production cuts that were agreed to in November by OPEC/ Non-OPEC members. There have been some who doubted the major oil producing nations and their promise to cut by the amount that they stated. As we can see, the members who are living up to their commitment the most, are those nations that belong to the Gulf Cooperation Council (Saudi Arabia, the United Arab Emirates, Kuwait, Qatar, Bahrain and Oman). Unfortunately, this information is only based off of the first half of the month, we will have to wait and see what happens in the back haldf of January.