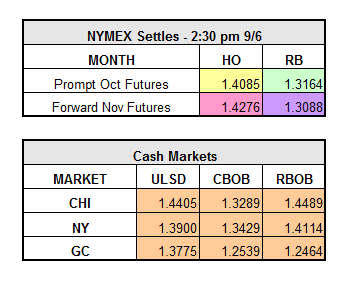 Oil is up slightly this morning as it continues to look for firm footing ahead of two key meetings later this month.  With an informal OPEC meeting set for the last week of September in Algeria, you can expect the rhetoric to continue among the big OPEC producers and Russia regarding production.  In addition, the Federal Open Market Committee meets September 20th & 21st and all eyes will be watching to see whether the Fed elects to bump up interest rates.

Earlier this week, Russia and Saudi Arabia issued a statement regarding the formation of a committee to monitor the market, which caused a spike in prices before leveling off (as the details were vague).  The most recent comments on a production freeze came as the Iranian oil minister said he “supports any potential measures aimed at restoring stability,” as was reported on CNN.com.  Iranian oil exports have increased this year as sanctions have eased and Iran is now nearing its pre-sanction level of 4 million barrels per day.  Of course the ultimate goal of a production freeze is to stabilize prices, which have risen from $26 per barrel to $45 per barrel.  Factoring in this price increase, the market still remains down more than 50% since 2014.  The “production freeze,” however, is step one in getting supply and demand of global oil rebalanced.  “We are seeing OPEC increasing production with the growth led mostly by Saudi and Iraq in 2015; now Iran is leading that growth.  So what we are seeing right now is that OPEC production growth is offsetting the decline in non-OPEC suppliers, (keeping) global supply rather stable,” said the IEA’s Security Director.  With the agency predicting oil demand growth to slow in 2017, one analyst believes that it will be another six to nine months before inventories are back at “more normal levels.”  Once these levels are attained and prices potentially increase, another factor weighing in will be the U.S. shale industry response.

Later today, the American Petroleum Institute releases its inventory data followed tomorrow morning by the DOE stats.  This data comes a day later than usual due to the Labor Day holiday.