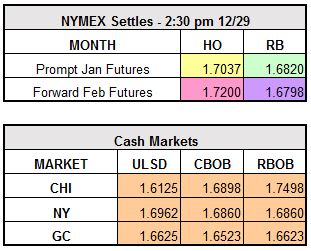 What a move for crude prices in December. WTI prices have risen more than 16% this month to $53.67/bbl today on the heels of the OPEC/non-OPEC production cut deal which will begin in January. However, with prices in December ending sharply higher, many are wary that prices have the potential of falling in January once we begin to get word of OPEC’s output for the month.

Kevin Book, managing director of ClearView Energy Partners, said on CNBC’s Squawk Box today that “historically OPEC always blows past its targets.” Meaning that, they produce more than what its stated quota is. Both OPEC and non-OPEC producers agreed to cut production by 1.758 million barrels per day. Russia agreed to cut 300,000 barrels of this figure and was widely perceived to have cheated its production cut target back in 2001. If we begin to gather information that these cuts will not be achieved in January, crude prices have a lot of room to fall. Keep in mind, prices were trading at $44.48/bbl on November 7th, when traders doubted a production cut agreement would be reached. Therefore, there’s a sizeable gap to the downsize if any of the producers cheat.

Furthermore, the strength in the dollar index could help push prices down. It currently trades at $102.23, up 4.5% since November 7th. Remember, the dollar index and commodity prices are inversely related; as the dollar index goes up, crude becomes more expensive in dollar terms.

In summary, January will be a very important month to determine the price path for the rest of 2017. Yes, 2017, it’s almost here! On that note, on behalf of Guttman Energy, we wish all of you a safe and prosperous New Year!