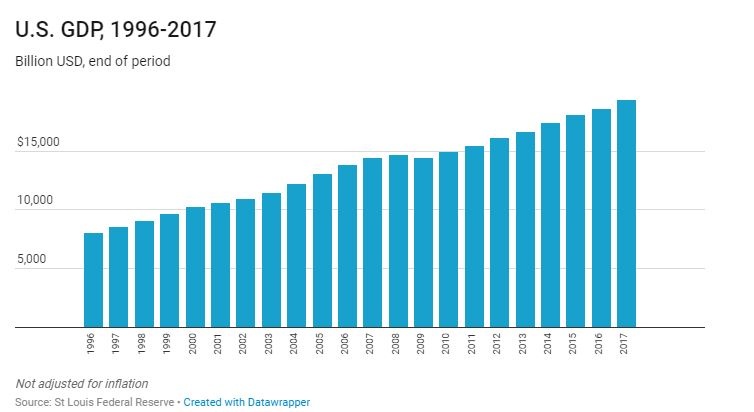 There has been much talk in the news recently about the United States GDP. The questions are, what is GDP and what does it have to do with the US economy?

“The gross domestic product (GDP) is one of the primary indicators used to gauge the health of a country’s economy. It represents the total dollar value of all goods and services produced over a specific time period, often referred to as the size of the economy” according to investopia.com. The four components of GDP are personal consumption, business investment, government spending and net exports.

The second-quarter gross domestic product data released Friday showed a 4.1 percent increase. According to Reuters, “U.S. consumer spending increased solidly in June as households spend more at restaurants and on accommodations, building a strong base for the economy heading into the third quarter, while inflation rose moderately.”

So what does this mean for the oil markets? Stated in an investopia.com article, “Before the resurgence in U.S. oil production, drops in the price of oil were largely viewed as positive because it lowered the price of importing oil and reduced costs for the manufacturing and transport sectors. This reduction of costs could be passed on to the consumer. Greater discretionary income for consumer spending can further stimulate the economy. However now that the United States has increased oil production, low oil prices can hurt U.S. oil companies and affect domestic oil industry workers.”