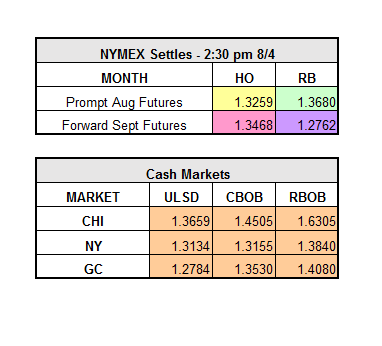 Playing off yesterday’s “Carry on You Wayward Market” we might say the market’s making a move to “The Land Down Under” today with crude, diesel down as of 11:00 AM EST. Crude is down $.75, diesel is down $.0200, and gas is slightly down $.0010. Another key driver of the falling market today could be the U.S. Dollar on the rise, up +.548 after multiple jobs reports showing productive gains. This is long overdue, since the dollar has weakened by 2 percent since the latter half of July.

Let’s recap the week of 8/1-8/5. On Monday, diesel finished down almost $.05 cents and gas about $.0150. Moving on to Tuesday’s settle, we experience little volatility, as the market took a break and diesel settled near flat, and gas up $.01. Since then, we have had heavy volatility on both products. Diesel has jumped 7 cents since Wednesday morning while gas increased 5 cents. There continues to be high volatility as we push through to the 4th quarter, and many wonder which direction we are headed. On Tuesday we discussed refinery problems in the Chicago market and that seemed to be the main driver of the Chicago cash market over the last couple days especially in Midwest markets. The API statistics were released Tuesday showing a draw in crude and gas, but a build in distillates. DOE day on Wednesday did not match up. Crude built overall by 1.4 million bbls, and Cushing built by 1.1 million. Gasoline drew 3.3 million bbls and built 1.2 million bbls in diesel. Yesterday continued the trend of a strong market, with the cash markets increasing and the racks in the northeast being heavily affected.