There have been blockades at 3 crucial border points between the US and Canada for nearly a week due to protests regarding the vaccine mandates in Canada. While two of them, one at Coutts and one at Emerson have dispersed, one remains at Ambassador Bridge bordering Detroit and Ontario. According to CNN Business, the US’s greatest trading partner isn’t China or Mexico but Canada. “The Ambassador Bridge, which separates the US and its neighbor to the north, may be the most economically important one-and-a-half miles of roadway in the Western Hemisphere. Until this past week it got very little attention for the crucial role it plays in the economies of the two nations.” 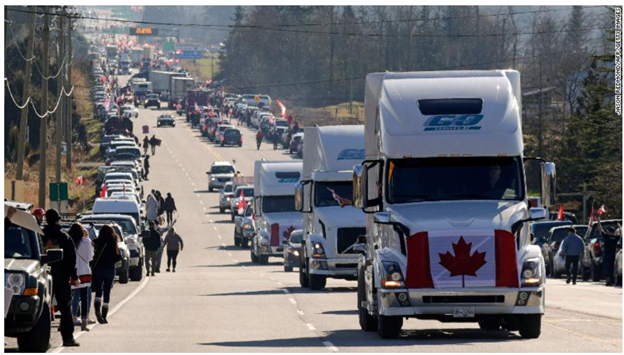 A total of $664 billion worth of goods moved between the two countries last year, according to US Commerce Department data. The state of Michigan estimates 30% of the total moved over the privately-owned Ambassador Bridge linking Detroit and Windsor, Ontario. An estimated 10,000 commercial vehicles cross the bridge daily. As of Sunday evening, the bridge is fully open again with protestors being arrested and vehicles being towed.

The automotive industry lost an estimated 50 million in wages because of the protest and blockades. “A lot of manufacturing, a lot of goods, depend on the bridge. It’s not just autos,” said Stephanie Brinley, principal analyst with IHS Markit. Global supply chain problems were already causing problems, so this just added to it. While this did not affect the cost of cars, it did affect the cost for automakers which according to the article, have had to pay extra to ship by air.