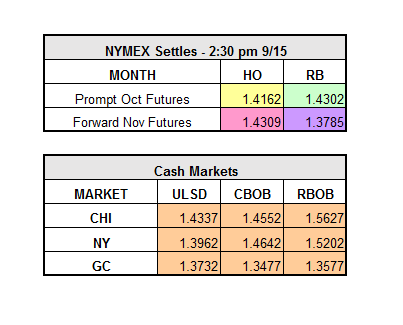 After a strong day yesterday that saw settles up across the board, the market is giving back some this morning as the ever present supply theme seems to be running strong again this morning.  “Oil prices keep trading in a narrow range.  A short spike yesterday is erased this morning as supply glut worries rule” said an analyst at Global Risk Management Ltd.  The lone exception at this point is the October RBOB contract which is trading higher as the Colonial Pipeline remains down, tightening gas supply in the Southeast and Mid-Atlantic states.  With a capacity of 1.2 million barrels per day, outages are expected to grow and become more widespread in that entire region into the weekend and next week.

The overall market pressure this morning comes as reports of Nigeria and Libya ramping up their oil exports are prevalent.  Royal Dutch Shell and Exxon Mobil have both lifted force majeure on Nigerian exports as the domestic violence there has calmed.  “The perception of more supply from Nigeria and Libya is trumping the physical markets.  The market could care less about strong physical markets when it sees potential for another 600,000 barrels per day of crude” said a North Carolina based broker.  This additional supply news comes on the heels of the DOE report released Wednesday which showed U.S. oil product inventory builds in both gasoline and distillates of 567,000 barrels and 4.6 million barrels respectively.  As the International Energy Agency summarized Tuesday and reported on Bloomberg.com, the oil surplus will last longer than previously thought as demand growth slumps and output proves resilient.

Newsworthy events to keep an eye on next week will be continued developments regarding the Colonial pipeline repair as well as news coming from the U.S. Federal Reserve policy meeting on September 20th and 21st with regards to interest rates.  The following week OPEC will be meeting in Algiers so pre-meeting rhetoric and comments should be heightened as we get closer.