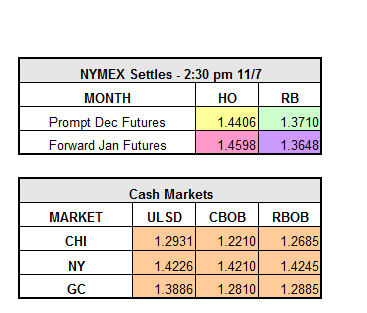 Happy Election Day to all. The most up-to-date polls are predicting that Hillary Clinton will finish on top of rival Donald Trump in today’s election. According to Reuters, Clinton is being viewed by investors as the safer/more stable choice for the U.S. economy. Some might say that Trump poses greater risk, but Trump supporters feel that taking that risk is a necessity.

Whether you support Donald, Hillary or even Gary, be on the look-out for market volatility these next few days, maybe even weeks.

While some of you are starting to trickle out of the office towards the polls this morning, the NYMEX is currently trading down on all products. Why, you ask? Chinese imports are down, the U.S. dollar is up and most importantly there is a lot of uncertainty surrounding our country’s future.

WTI crude traded down under $45 yesterday, despite FBI statements regarding Hillary Clinton, which had the market up early. OPEC announced this morning that oil prices are not expected to rise as much as they originally anticipated.

Demand cannot trump production at current levels, since there is still so much product in the market. In order for demand to rise to a considerably higher level, OPEC will have to find an effective way to reduce production. Coming to agreement on a production freeze by November 30 seems unlikely, so it looks like raising the price floor to $60 per barrel could take longer than OPEC would like.

Some believe that this election could dictate the strength/weakness of certain industries and markets. For example, there are many coal miners who feel that Trump would be better for the coal industry than Hillary, since Democrats tend to lean towards the “Go-green” movement. On the other hand, if you work in the aluminum industry you more than likely support Hillary since she is expected to bring greater regulation to the automotive industry than Trump would.

Oil prices typically slide during a 90-day period following Election Day, according to S&P Global Platts. Their report shows that prices tend to rebound around the time of the newly elected president’s inauguration in January. For example, in 1992, Brent crude fell off of $19.46 per barrel to a low of $16.56 per barrel on the day of his inauguration. When George W. Bush was elected in 2000, oil prices fell approximately 37 %  between Nov. 15 and Dec. 20.

Regardless of your political affiliation, occupation, gender, race or religion, keep in mind that no matter what results come out tonight, we are all one and the same, when it comes to having no clue what’s in store for our country once a new president is elected.