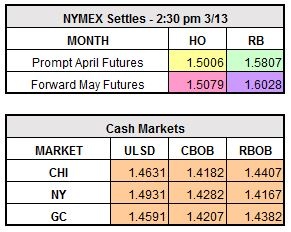 Today can be classified as full of uncertainty and uneasiness all around the world. Oil traders are again worried that U.S. storage will run out of capacity. Snowstorm Stella is wreaking havoc across the Northeast. China, Japan, North Korea, and the U.S. are uneasy over each other’s movements in the South China Sea. All of Wall Street awaits the two day FED meeting which kicks off tomorrow.

Oil is now steadily below $50 on the WTI contract, currently trading down $0.90/barrel today at $47.50. Prices declined Tuesday as OPEC said oil stocks in industrialized nations rose in January to 278 million barrels despite the production cuts. This was all the bears needed in trading this morning as many think we are headed to $45. Preliminary guestimates by Reuters indicate crude stocks may have built by 3.2 million barrels last week; we’ll get official DOE numbers tomorrow. The fact that we are still building inventory with already record supplies on hand has scared a lot of long positions out of the market, with the potential for even more downside risk.

In case you haven’t heard, snowstorm Stella is causing some distress today. The blizzard is hitting the highly populated Northeast with snow accumulations exceeding two feet in some areas. This has dampened demand for fuels which may also be putting pressure on energy prices today. In fact, Pennsylvania Governor Tom Wolf has banned transport trucks from traveling on interstates today, which has made a lot of carriers take their trucks off the road until the weather lets up.

Tensions seem to be tightening in the South China Sea. North Korea warned of “merciless” attacks against the U.S. as the USS Carl Vinson launched military drills earlier today. China is also a bit uncomfortable as the U.S. begins to deploy a missile defense in South Korea as a result of North Korea’s missile launches last week. China fears that the radar detection software on the system can look deep into China’s territory, threatening its security. All the while Japan announced its largest warship will soon embark on a three month tour in the South China Sea.

Lastly, we cannot forget about the Federal Reserve two day meeting which starts tomorrow and is likely to end with a hike in interest rates. Virtually all of Wall Street is expecting a 0.25% interest rate hike result from the meeting, but are also keenly interested if the FED outlines any clues regarding its policy plan for the rest of the year. This has a direct effect on the oil patch as hiking interest rates increases the value of the dollar, which can make commodity prices weaken.