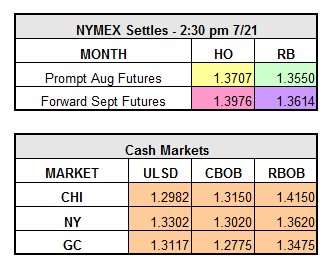 Yesterday, HO settled down $0.0347 to $1.3707 and RBOB finished down $0.0087 to $1.3550 (lowest since early March). August WTI crude lost $1.00 to $44.75, reaching a low of $44.25/bbl during overnight trading, a level that we haven’t seen since May. With U.S. inventories remaining at the forefront of oil price concern, trading is continuing on the downtrend this morning.  If major producers hold crude output at current levels, fundamentals could take a greater hit in coming months. A stronger U.S. dollar is also putting pressure on prices.

The market is becoming more conducive for U.S. crude exports following last year’s lifting of the 40-year crude export ban, an optimistic sign for domestic oil producers. Although restrictions were lifted last year, the global supply glut was expected to overshadow any advantage for foreign buyers to purchase cargoes of U.S. crude. However, this sentiment is proving to be untrue. The cost of transporting crude to the Gulf Coast is waning due to falling freight rates and lower U.S. pipeline and railway fees, and with declining U.S. oil rigs and lower breakeven costs, imports of U.S. crude are becoming advantageous for new buyers such as Panama and the Bahamas. U.S. crude exports are currently at the highest level since 1920 and almost double the amount from January of this year.

On a contrary note, according to a Reuters analysis of vessel flows, exports do not appear to be thriving as much globally. OPEC’s June exports have fallen 130,000 bpd compared to May. A pipeline leak has affected 100,000 bpd in July exports from Iraq compared to last month. Further, China has 10 refineries under maintenance, so Western countries such like the U.S. and European nations may become the home to more OPEC crude exports, further swelling domestic stockpiles and hindering recovery in oil prices.