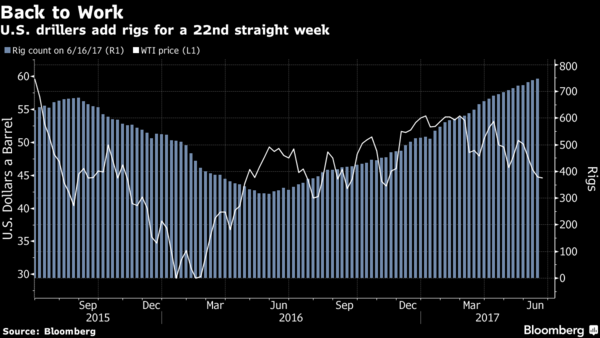 Many people have many different ways to view the number 22 around the world. It is said that the number 22, according to The Numerology, is the “most powerful of all numbers, able to turn lofty dreams into realities. It is confident, pragmatic, ambitious and disciplined.”  Here in the U.S. the number 22 does represent ambition and confidence as we see yet another week of rig count increases despite the price per barrel trading near $45 a barrel.  Twenty two straight weeks of rig count growths marks the lengthiest stretch in nearly three decades.  The key question everyone is asking is how low does the price per barrel need to drop before we see a plateau in rig counts.  Or the flip side of the coin on that question is how much forward production was hedged by U.S. producers and how far out in the future?  At what point do new efficiencies in drilling lose the battle to the declining cost of oil?  The U.S. upped its rig count by seven last week, bringing the total to 747.  The natural gas rig count rose by one to a total of 186.  This brings our total rig count to 933, with U.S. production expanded to 9.33 million barrels per day.

Morgan Stanley reported, “Unless the US oil rig count declines substantially and US shale production rolls over, we estimate that OPEC would need to continue its current quota for the entirety of 2018 to prevent an inventory increase, or would need a much deeper cut to see inventories decline back to their 5 year average.” The answer to the oversupply glut was originally that a second round of cuts was necessary to balance the market.  It is now being said that the cuts would need to extend THROUGH 2018.  The U.S. again is not the only culprit crushing OPEC’s hopes right now.  Libya has now risen to roughly 900,000 barrels per day.  The Sharara, Libya’s largest deposit, is up and running full strength.  Bloomberg reports that Libya, excited about being exempt from OPEC cuts, will boost its production to the highest levels since 2013 by the end of July.

Since the meeting May 25th, the date the OPEC announced a second round of cuts, the price of oil is down roughly 14%.  Saudi Energy Minister Khalid al-Falih does not seem too worried though, stating “Short-term volatility is mostly a reaction to short-term factors …as well as the role of speculators in stock markets that increase market volatility.”  The Saudis do have a card in their hand that they are able to play that could affect the U.S. inventory numbers in their favor.  The Saudis own a very large refinery on the U.S. Gulf Coast.  The next move projected by the OPEC juggernaut is to begin dropping exports into the U.S. by between 100,000-250,000 barrels per day.  By doing this OPEC can potentially begin to diminish our inventories and put us in a position where we begin consuming our own stockpiles at a higher rate.  With roughly 1/8 of U.S. imports coming from the Saudis, the inventory effect of these changes in exports would likely produce a price upsurge.  Time will tell how this will play out but it is clear that with the Saudi’s owning the largest refinery in the U.S. they will try to do whatever is necessary to get the numbers where they need them.