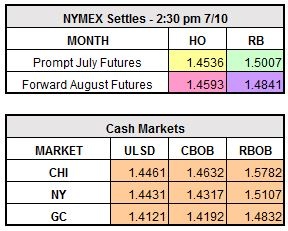 After starting the day in the red, the oil market is trading higher despite several banks lowering their oil price forecasts as traders square their positions ahead of tomorrow’s inventory data.

August WTI traded as low as $43.83/barrel this morning, down $0.57 from yesterday as Barclays and Goldman Sachs hinted at oil prices being lower for longer. Barclays slashed its 2017 Brent Crude price forecasts from $55 to $52 and its 2018 forecasts from $57 to $52. Goldman Sachs said that without a significant fall in oil inventories during the summer drawing season, we could see prices dip into the $30s, where U.S. shale producers could really start feeling the pain without hedged production.

Reuters’ poll of six analysts estimate that crude oil stocks drew 3.2 million barrels during the July 4th holiday week. Both gasoline and distillate stocks are expected to build by 1.5 million barrels, while refinery run rates are forecasted to rise again by another 0.5% to 93.6% of operable capacity. Genscape reported yesterday that it expects crude stocks in Cushing storage to draw 2.0 million barrels. Since July 4th is the last major holiday until Labor Day, keep a weather eye on gasoline stocks and demand figures in the report tomorrow. That could be the telltale sign that drives price action.

However, any strong sell signals may be muted in the interim until the OPEC/non-OPEC meeting on July 24th. Speculation thus far is that no further production cuts will be discussed, but they could cap production limits on Libya and Nigeria. This meeting will strongly consider the growing U.S. production, as Baker Hughes reported Friday that U.S. oil rigs increased last week by 7 to a total 763. This is the highest active U.S. oil rig count since April 2015.