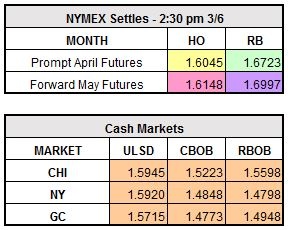 The short-covering rally continues today as futures prices in the oil complex trade higher before industry inventory data is published tomorrow. The primary driver of this rally is Libyan unrest and speakers at the CERAweek conference in Houston this week.

The Benghazi Defense Brigades launched an attack late last week on Es Sider, an oil export terminal in Libya. The fighting has caused oil production to decline by approximately 35,000 barrels per day, propping up prices. Another bullish component has been the rhetoric at the CERAweek conference in Houston. The conference draws speakers across the world, including key figures from Saudi Arabia, Iraq, and Russia. Although there haven’t been any strong comments about further production cuts, the market has elected to cautiously trade higher as more and more speakers take the stage.

Despite the bullish headlines, the market is looking towards tomorrow’s inventory data published by the Department of Energy. Seven analysts polled by Reuters expect a moderate build in oil inventories tomorrow of 1.7 million barrels, which would put U.S. stocks at a new record of 521.9 million barrels. Yesterday, Genscape estimated that oil stocks in Cushing, Oklahoma increased by 1.9 million barrels last week. This would put its current oil inventory at 87.8% of its capacity.