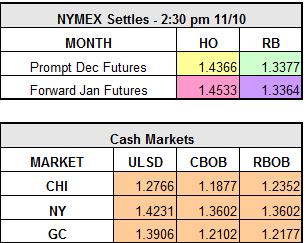 First and foremost today and every day, to our Veterans – Thank You!

The oil market continues to be under pressure after a day when prices dropped across the board.  Yesterday, crude settled down over half of a cent to finish the day at $45.84.  Refined products also ended lower with RBOB and Heating Oil down almost $0.02 and $0.0045, respectively.  Today the downward trend is continuing with crude and refined products solidly in the red.

Two contributing factors (supply and OPEC) are not new.  The third (Donald Trump’s presidential election win) is new and was somewhat unexpected.  Let’s look at the latter first.  With Trump’s win earlier this week, the dollar is on track to having its strongest week in a year.  As has been detailed in this blog by others, this recent surge in the dollar has put downward pressure on crude prices, due to the inverse relationship between the U.S. dollar index and crude prices. In turn, this gives foreigners greater purchasing power for crude oil.

Of course, the other two factors continue to be the same theme that we have heard for months – oversupply and doubts on an OPEC production agreement.  OPEC just reported another record, pushing the supply in October to 33.64 million barrels per day, an increase of 240,000 barrels per day from September.  With these new numbers, a production cut of approximately one million barrels per day would be needed by the cartel to come close to its earlier goal of reducing output to 32.5 million barrels per day.  When growing non-OPEC production is factored in, the supply glut is that much more.  As one industry analyst stated, “Oil markets are increasingly reflecting growing consensus that the persistent oversupply seen throughout 2016 will carry into 2017.  We would actually go a step further, as while 2016 has seen a significant improvement from 2015 with easing oversupplies, 2017 will be worse again barring massive outages or OPEC action.”  With the next OPEC meeting scheduled for later this month, there is worldwide uncertainty regarding the outcome.  In addition to doubts over whether an agreement amongst the 14 member nations can be reached, there are additional issues as to how the possible cuts will be monitored and reported.