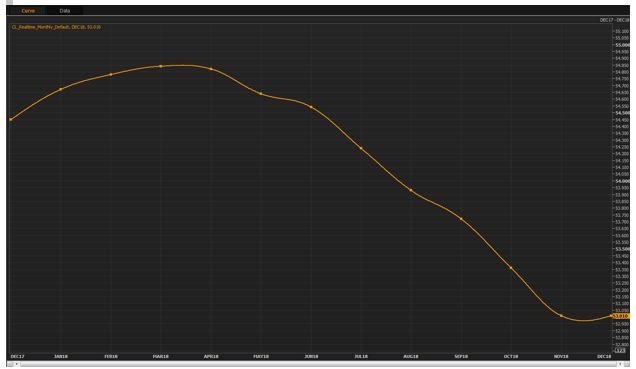 The oil markets are trending much in the same manner this morning as yesterday’s settles.  At yesterday’s close, WTI finished down $0.08 at $54.30/bbl, while heating oil and RBOB finished mixed to close at $1.8625/gal and $1.7410/gal respectively.  Yesterday’s activity was on the heels of the American Petroleum Institute data from Tuesday afternoon followed by the Department of Energy’s data Wednesday morning.  Both of which showed large draws in crude and the refined products.  The major factor leading to the draws is the recent uptick in global oil consumption.  As a result of this, prices have surged recently and the futures market has shifted from contango to backwardation when looking at a one year curve through 2018.  As a quick tutorial, backwardation is when the current price of oil is higher than a future cost.  This reflects higher immediate demand.  The flip-side of that coin, contango is when prices are higher at a point in the future as opposed to the immediate spot price.

With no major news influencing the markets today, the themes continue to be the same.  Russia is saying that the extension of the OPEC / Non-OPEC production cuts will be discussed in Vienna at the end of November with a firm decision to follow thereafter.  The current agreement runs through March of 2018.  Reuters released a survey Wednesday regarding compliance for 11 oil producing nations that agreed to the OPEC production cuts.  This survey revealed a 92 percent compliance rate versus 86 percent in September.