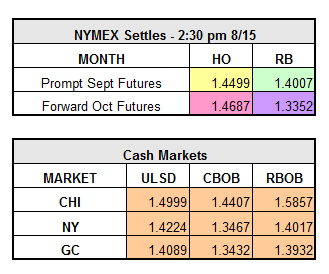 Despite a reported five million bbl draw in gasoline inventories over the past two weeks, stocks are still at record highs and will have a tough time seeing support as demand begins to dwindle toward the end of summer. ULSD will increase in demand as the weather gets colder, with November HO trading $0.0400 higher than September as a result.

Due to refinery issues at BP’s Whiting, Ind. facility and low regional inventories, Chicago prices are the highest in the nation for gas and diesel.  National gasoline and diesel prices are about 5-10 cents cheaper than the Midwest.

Oil prices are heavily impacting PAO Resneft, Russia’s state-owned oil company, according to a statement yesterday. Profit for the first half of the year was down $1.6 billion, almost half (45.8%) from last year. Last week the Saudi oil minister claimed to be in consultation with Russia’s energy minister to agree on plans to stabilize the market.

Norway’s crude oil production has increased 10% over the past year, with output now at a five year high. At 1.73 million bbls a day of production in July, output is the highest since March 2011.

Emmanuel Kachikwu, Nigerian Minister of State for Petroleum, has stated that he thinks there is little likelihood of an OPEC production cut next month in Algeria.