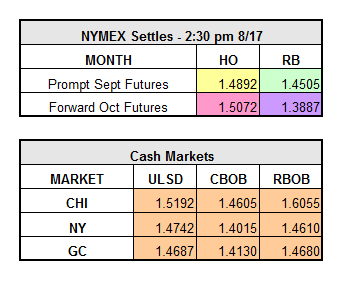 The beginning of August was filled with bearish news that was keeping the market on a downward trend. Builds in products and crude on the DOE and API reports, increased demand, and most importantly the global supply glut are keeping this market at levels similar to what we’ve seen over the last several months. Back on July 26th, diesel hit 3-month lows, settling at $1.3228 and crude was heading down near $43.00 a barrel. A week later on August 2nd, prices continued to plummet, with diesel settling the day prior at $1.2579 and crude on the barrier of breaking $40 a barrel. Crude eventually did, a couple days later, but all signs were pointing to the market continuing its noticeable trend of possibly reaching the lows we witnessed earlier in 2016.

Since then, a span of 12 days has passed, and today diesel is currently at $1.5158 and crude is back up near $50, at $48.17. Gas went from $1.3036 on the 2nd to $1.4780 today. Lately, we have witnessed bullish news with continued talks on the return of the crude freeze, weakened demand, and the occasional supply disruptions due to attacks on pipelines and refinery issues.

Keep in mind that Saudi Arabia reached record high crude production in July. The kingdom needed to boost its barrels to meet summer demand for power companies and to keep up with Russia and Iran. Monday’s blog pointed out a possible link to the recent surge in prices: “Did Saudi Arabia see detriment when crude closed under $40 earlier last week, and therefore pump information into the market to raise the price?” Pretty interesting to think about.