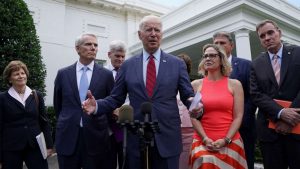 The Senate’s bipartisan infrastructure bill states that, $274 billion of the $550 billion in new spending is going towards transportation. That will be a massive, one-time infusion of money into the nation’s roads, bridges, airports, rail systems and transit. Transportation Secretary Pete Buttigieg will have the final say of roughly $105 billion of that $274 billion. Jeff Davis of the Eno Center for Transportation said, this amount is the most a transportation secretary has been given for discretionary grants. Rail is set to receive a massive $66 billion compared to their $2 billion in yearly federal subsidies before the pandemic. Transit would receive a one-time infusion of $39 billion. Highways would be granted about $110 billion. There are many entities receiving portions of these large sums and you can find more details on the breakdown by clicking one of the links below.