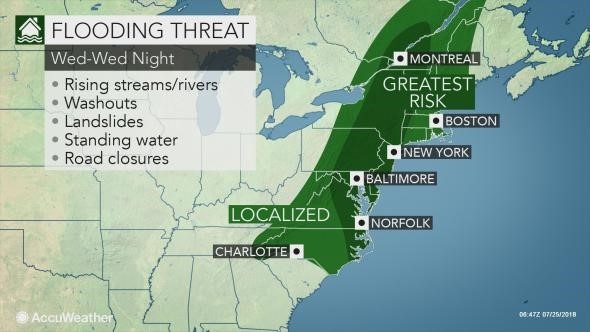 Oil prices continue to be range bound until the market bulls or bears take control. As of this morning, there were more bullish than bearish factors which is resulting in green across the board for the moment.

On the bearish side of things, we need to watch how much this torrential rain on the East Coast this week will dampen demand and affect next week’s DOE report.

Rain from the outset of this week in the Carolinas, Virginia, and Pennsylvania has resulted in localized flooding and will probably decrease demand of refined products. As this system moves northeast, Accuweather reports that “rounds of torrential rain and serious flooding will continue in a tropical atmosphere in the mid-Atlantic and spread into more territory of the northeastern United States into Thursday.” Although this is a temporary situation, it may cause refined product prices to soften relative to crude as we head into the end of next week.