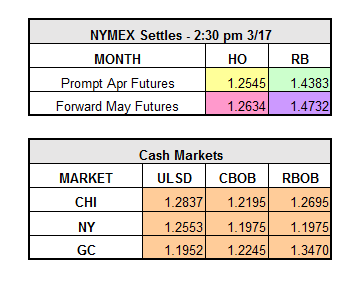 Diesel and gas continued to rise throughout the morning, but as of 11:45 AM EST, both are falling closer to even. Over the past two days the market surged upwards on products and crude. The U.S. dollar weakening over that time period could be a major culprit. The dollar is set for the biggest one week loss in the past 4 years. It finally slowed down this morning, with the U.S. Dollar Index being up +0.144 to 94.945. Another reason for this bullish market over the last couple of days could be the Federal Reserve’s recent decision to delay the timing—and reduce the number of—interest rate hikes in 2016. The announcement slammed the dollar lower, which buoyed financial markets and supported the advancement of oil prices. Thus, it was a domino effect yesterday.

As WTI moves above $40.00/bbl for the first time since Dec 7th of 2015, there is a lot of talk about producers hedging (i.e,. locking in their production at this higher level). If prices continue to move higher, we might see U.S production ramp back up. Iran still holds the key, though. Unless there is an actual production cut from Iran, (if it hits 4 million bpd), there could be another round of lower prices on the horizon.

Turning to more (bearish) news in the oil market, U.S. crude oil output dropped to just over 9 million b/d, marked the lowest U.S. production level since November 2014, according to the latest supply data from the U.S. Energy Information Administration (EIA). At 9.068 million b/d, crude oil output throughout the week ending March 11 was down 10,000 b/d on the week, and 351,000 b/d below the level for the corresponding week last year.