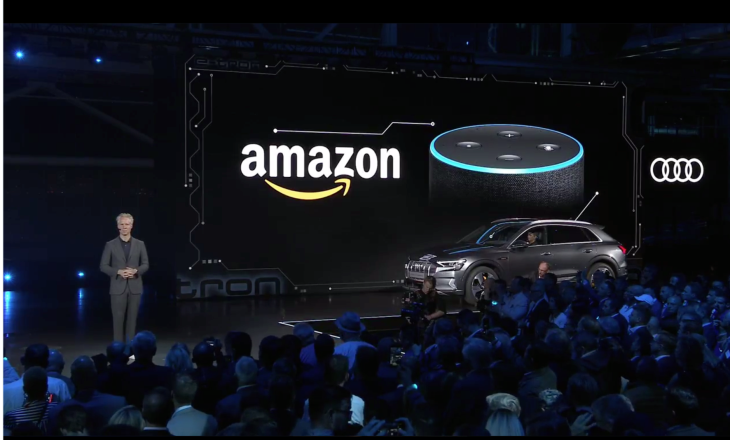 Auto makers have begun to produce Electronic vehicles or EV’s at a rapid pace in order to comply with Corporate Average Fuel Economy or CAFE standards. As of yesterday, another auto manufacturer has announced its 2019 entrant into the competitive EV landscape. Audi announced the global launch of their new electric sport utility vehicle, named the e-tron midsized SUV. Surprisingly enough the announcement was made in San Francisco which is the home of Tesla. It can be inferred that the “launch site” choice is a direct shot at Elon Musk’s Tesla operation and the current leader in the EV market.  According to Reuters, “The Audi e-tron midsize SUV will be offered in the United States next year at a starting price of $75,795 before a $7,500 tax credit.” To further increase their chances of surpassing Tesla, Audi has chosen to partner with Amazon to tackle the recharging problems with EV’s.

Currently the biggest challenge facing the EV market is the lack of charging stations, including but not limited to home charging. Reuters goes on to say, “Audi will partner with online retailer Amazon to sell and install home electric vehicle charging systems to buyers of the e-tron, the companies said on Monday. Amazon will deliver the hardware and hire electricians to install them through its Amazon Home Services operation.” To sweeten the deal for perspective auto buyers, “Audi is also offering 1,000 kilowatt-hours of power to e-tron owners over four years through Electrify America’s chargers. By July 2019, this network will include 500 fast-charging sites (completed or under development) the 40 states and 17 metro areas, according to Audi.” The number of charging sites is relatively small considering Tesla has 1,342 fast-charging stations with 11,013 superchargers but it is an all important first step into gaining a foothold in the market.

Audi also took another step in the “green” movement. According to Techcrunch, “In a third partnership announced with Arcadia Power, the digital utility service will allow Audi e-tron owners offset their home electricity consumption with renewable energy. E-tron owners can connect their electricity bill to Arcadia Power and select a renewable energy project to support. Subscribers then receive savings their monthly electricity costs, depending on the project’s energy production, according to Audi.” In an industry that seems to need any positive “green” PR the addition of a “renewable energy” option is a major win.

While this might read as just another auto manufacturer entering the 2019 EV market, it is important to notice the additional partnerships that are forming. The addition of Amazon is shift towards major players in other sectors trying to impart influence in new markets. This shift will be something to keep an eye on as more 2019 releases are set for later this year.