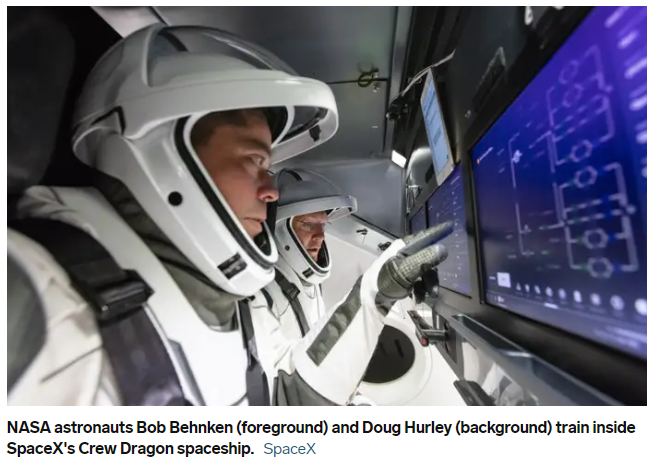 In an historic weekend, the NASA and SpaceX launched two U.S. astronauts Bob Behnken and Doug Hurley into space for landing on the International Space Station (ISS). SpaceX was founded by Elon Musk and plans to expand its galaxy travel to flights around the moon and direct to Mars. The Mars flights would (hopefully) result in the establishment of cities on Mars and a million occupants of the planet.

This launch is historic for the US space program because NASA astronauts have not been launched into space off U.S. soil since 2011. Doug Hurley was a part of the 2011 launch. “Since then, NASA has relied on Russian Soyuz rockets to ferry its astronauts to and from the International Space Station. That has become increasingly expensive and limited US access to the station.”[1] The astronauts are in SpaceX’s Crew Dragon spaceship. The Crew Dragon was built with NASA funding and can seat seven. On Wednesday, the Crew Dragon launch was called off just 17 minutes before its scheduled time due to weather conditions. The launch was pushed and successfully executed on Saturday.

Since 2011, NASA has been relying on the Russian spacecraft Soyuz, which seats 3, to transport astronauts to the ISS. A cost of a seat on Soyuz is more than $90 million dollars for a planned trip in October 2020. “Once NASA can send more astronauts at a lower cost, it will also be able to use the space station’s microgravity environment to conduct more science experiments — in pharmaceuticals, materials science, astronomy, medicine, and more.”[2] The cost of a seat on the Crew Dragon is estimated to be around $55 million per astronaut.

On Sunday morning, the Crew Dragon, now nicknamed Endeavour, docked to the ISS just above China and Mongolia. Behnken and Hurley will be on the ISS for over 100 days. “The overarching goal of the test mission is to show SpaceX’s ship is safe to fly people. If NASA determines it is, then the agency can fully staff the space station with astronaut crews and maximize its ability to perform research.”[3]

“SpaceX’s billionaire CEO Elon Musk has said that he named his spacecraft ‘Dragon’ after the fictional ‘Puff the Magic Dragon,’ from the hit song by music group Peter, Paul and Mary. Musk said he used the name because many critics considered his goals impossible when he founded SpaceX in 2002.”[4] SpaceX next plans to be the pioneer in commercial space flights. They, in conjunction with Space Adventures, have sold four seats on the first flight. Hollywood is also interested in partnering with SpaceX to film a movie on the ISS.