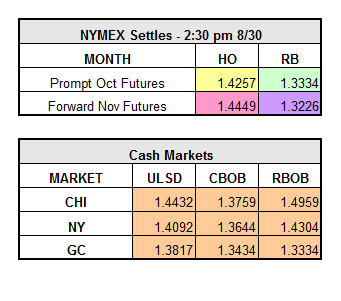 The market took a big turn south yesterday due to continued strength of the U.S. dollar, and somewhat bearish statistics on the DOE report yesterday morning. The API report on Tuesday evening kick-started the downward momentum, showing a build in crude of nearly 1 million barrels, and a build of 3 million barrels on distillates. Yesterday, the market closed down over 4 cents on diesel and gas, with crude down $1.65. Currently we are seeing a continued drop off, with diesel down $0.0400, gas down $0.0425, and crude down $1.14. HO fell below $1.4000 and crude is cruising back down towards $40 a barrel, but not quite there yet, sitting at $43.62. These stats are as of 11:00 a.m. EST.

As we begin the month of September keep in mind that OPEC will meet at the International Energy Forum in Algeria, and there have been talks again of a “production freeze on crude.” OPIS made an important statement this morning, saying: “Even if a freeze were to take place, OPEC output in August was one of the highest in history at 33.5 million barrels per day, and most countries are still aiming to maintain market share amidst competition from non-OPEC countries.” It wouldn’t be a surprise if the market has a lot of volatility leading up to the meeting, but OPIS makes a great point that even with a freeze, we will still be flooded with product.

The DOE inventory statistics are a reminder that plenty of product exists with inventories of crude and refined products being on the high side of 5 year averages. U.S. East Coast distillates are at the highest seasonal level since 2010 and Padd 3 (GC) crude is the highest ever at this time of the year.