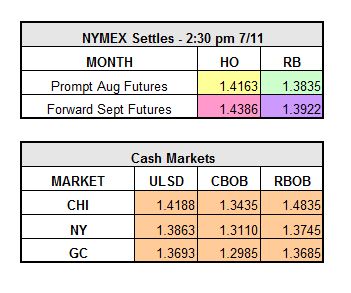 The market rebounded this morning and is continuing to remain strong after a weaker U.S. dollar, which is down $.0120 to $96.42 today. Another factor that is adding to the bullish market is the continued conflict in Nigeria, after the NDA (Niger Delta Avengers) blew up the Qua Iboe crude oil terminal operated by ExxonMobil late last night. The Qua Iboe is Nigeria’s largest crude oil terminal, exporting over 300,000 barrels a day. Whenever there is a supply disruption of any sort, it is common for the market to react abruptly and if it heavily affects supply, the market should continue to rise (as witnessed with the Canadian wildfires back in May).

Let’s recap news that could sway the market either which way. On the bearish side, we have rising U.S. oil rig counts, improvements in Libyan supply, Brexit news, and a stronger dollar. Bullish influences include supply disruptions, geopolitical unrest, Brexit news/uncertainty of the European economy, and possible OPEC announcements regarding the need for crude to exceed $50 again to sustain investment.