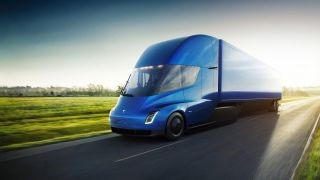 Back in November of 2017, Elon Musk unveiled an all-electric battery-powered Class 8 semi-trailer truck prototype. Musk provided specifics of two versions, regular production of 300 and 500 mile ranges. Just last week, the prototype traveled by itself. The Semi has been traveling thousands of miles using the existing Supercharger network. The only necessary help is an extension cord that is needed to plug the truck in when time to charge the vehicle. With the announcement of the prototype, Tesla also announced an ultra high-powered “Megacharger” that will be capable of replenishing 400 miles of range in as little as 30 minutes. .

The American trucking industry is responsible for handling the transportation of up to 71% of food, retail goods, construction supplies, as well as other cargo delivered to customers and businesses every day. In 2017 alone, the US trucking industry generated $700.3 billion in economic activity, a 3.5% increase compared to the $676.6 billion it made in 2016 giving Tesla an opportunity within these markets

The Tesla Semi has a very sleek and futuristic look, but it is designed from the ground up to be a strong machine. The Semi is equipped with four Model 3-derived electric motors, which give the vehicle instant torque and a 0-60 mph time of 5 seconds without cargo. The long-hauler is also classified as a Class 8 truck, which allows it to haul as much load as conventional diesel trucks. Tesla also listed a range of 300-500 miles per charge for the Semi, though Elon Musk has since noted that the truck’s long-range variant would probably have closer to 600 miles of range per charge.

Some questions come to mind. How long does it take to charge fully using the “regular” Superchargers? How likely is it that drivers could rely on them when Megachargers aren’t available? Where and when will these Megachargers be put into place?

. In the first quarter of this year Tesla had already received roughly 2000 pre-orders for the new vehicle. Tesla continues to visit potential customers throughout the U.S. The industry may have doubts about Tesla’s ability to deliver an electric truck with over 500 miles of range the anticipation continues to rise for a significant change in the trucking industry.