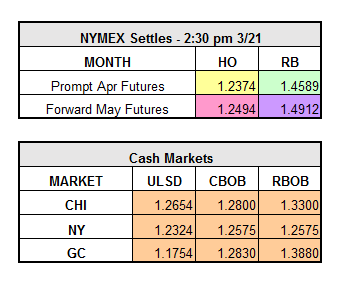 Both refined products and crude are pushing upward following the terrorist attack in Brussels, Belgium this morning. Two blasts in the Brussels Airport departure hall and one at the nearby underground subway station killed at least 26 people and wounded 130 more. Belgian authorities have confirmed that the airport attack was a suicide bombing.

Yesterday, April WTI crude finished up 47 cts to $39.91/bbl, and May took over as the front-month contract. Bullish indications for crude include an expected draw of about 600,000 bbls at Cushing this week. Additionally, BP and Statoil announced yesterday that they would be removing their employees from two of Algeria’s largest natural gas fields following an Islamic terroristic attack on Friday. A rocket-propelled grenade attack hit the In Salah processing plant, the second attack in three years.

Libya has decided to follow Iran, declaring today that it will not be attending the April 17 production freeze meeting, and wishes to increase crude output to pre-civil war production rates. Libya’s current output has fallen to less than 400,000 bpd since 2014. Before the 2011 civil war, Libya was pumping 1.6 million bpd.