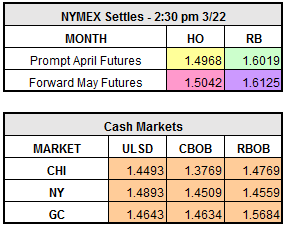 A day after digesting the Department of Energy stats and after many days and weeks of volatility the market seems to be taking a breather thus far today with all oil market indices except RBOB (down ~ $.0100) hovering somewhat flat.  As was reported in this space yesterday, the DOE stats were in-line with Tuesday afternoon’s American Petroleum Institute numbers.  The consensus among both reports were builds in crude stocks with draws in both refined products.  This latest inventory report is again raising questions about compliance by OPEC nations and Russia to cut production.  As one European analyst stated, “Headwinds from rising production and compliance issues will keep the upside limited for now.”  He went on to add that risks were “skewed to the downside.”  At yesterday’s settle, crude finished down $0.0020 to settle at $48.04 while heating oil and RBOB also finished down to close at $1.4968 and $1.6019, respectively.

As has been detailed for months now, the supply tug of war between the U.S. and OPEC will continue with no apparent end in sight.  One motivating factor for Saudi Arabia to keep prices higher and supply lower is the pending public stock offering of Saudi Aramco.  In addition to higher crude prices increasing revenue for the nation, the higher pricing will also boost the valuation of Saudi Aramco when it goes public.

Newsworthy domestic events to monitor in the coming days and weeks will of course be the possibility of further interest rate increases, the administration’s progress on tax reform and the various FBI investigations taking place.  Globally, there is Brexit as well as the question as to whether OPEC/non-OPEC producers will extend their 6-month production cut agreement.  Currently, the consensus is that the agreement will be extended.