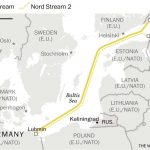 Earlier this week, the U.S. and Germany announced they would come to an agreement resolving the long dispute over Russia’s $11 billion Nord Stream 2 pipeline project. The project is an offshore natural gas pipeline that runs under the Baltic Sea from Russia to Germany. The project began in 2018, with plans for completion sometime […]