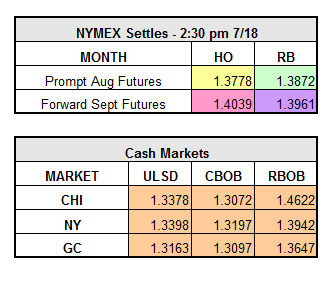 Global oversupply is in direct conflict with bullish data this morning as the market is still trying to decide which way it wants to move. Inventory data reports, which will be released at 4:30PM today by the American Petroleum Institute (API), are expected to show draws in crude inventory levels. Additionally, the EIA is expecting the 10th consecutive month of decline in Shale Oil production for August. Operations on North Sea platforms are expected to be disrupted next week; a 24 hour strike is planned by Wood Group oil and gas maintenance workers to protest wage and working conditions.

Shipments and pipeline flows are running at normal levels after an attempted coup in Turkey failed. Turkey is a crucial channel of millions of barrels of crude transport from Russian and Iraq to the Mediterranean Sea daily.

Although a slow day in oil market news, the global supply glut is still a mounting concern. Prices fell to two-month lows yesterday as the market remains oversupplied in gasoline and other refined products. Adding to bearish sentiment, China’s oil demand is expected fall in the coming months due to lesser demand for fuels as Iran continues to boost oil exports. Further, with fall refinery maintenance approaching, refiners may begin purchasing less crude.