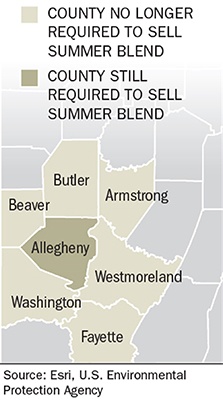 Pittsburgh, PA is of particular interest as it appears Reformulated Gasoline (RFG) may have made its last appearance there and the surrounding counties. For twenty years Pittsburgh consumers have paid much higher gas prices than the rest of the state, excluding Philadelphia. Premium Reformulated gasoline Premium Blendstock for Oxygentate Blending (PBOB) is the most expensive product in the U.S. outside of California. The Environmental Protection Agency along with state legislators have agreed to relax the RFG standard in Pittsburgh and the surrounding seven counties.

On September 16th Pittsburgh goes back to conventional grade products anyway. The current wholesale 87 grade price spread is $0.0920 per gallon between the two products. Along with the specification change, the spread between  September to October NYMEX futures has been trading around $0.10 in backwardation as well.  While you can continue to sell RFG gasoline past September 15th, the price downgrade to conventional coupled with the futures decrease, will have suppliers running themselves out to avoid carrying the RFG barrels any longer than they have to.

So while all of the above is good news for consumers, it’s bad news for wholesalers who are scrambling.