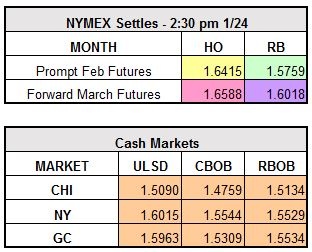 Today the EIA reported crude inventories increased 2.8 million barrels, right in line with the 2.9mmbs expectation. Distillate built 0.1mmbs vs. the 2mmbs expectation and Cushing oil inventories fell 0.3mmbs vs. the 0.145mmbs consensus. Gasoline inventories stood out on the page for the second consecutive week. Stocks increased 6.8mmbs vs. the 4.85mmbs consensus. Production increased another 17,000 barrels per day throughout the U.S. which makes sense given the 35 drilling rigs added last week. However, refineries decreased their run rates from 90.7% to 88.3%, meaning that refineries are pumping out less product to help combat the glut of refined products we are currently seeing.

Despite the aggregate drop off in runs, Midwest (Chicago) refiners are flooding the market with product. Their run rates presently stand at 93.2% utilization, compared to the East Coast rates of just 80.4%. This has been reflected in the Chicago cash markets over the past week. Since January 18th, both Chicago cash ULSD and RBOB basis have dropped 5 cents per gallon. This excludes the value of the NYMEX. The warmer-than-average weather we’ve been experiencing has certainly lessened heating oil demand which justifies this drop in cash prices.

In other news, it is a historic day as the Dow Jones Industrial Average hits a record intra-day high, surpassing 20,000 for the first time. Thomas Roth of MUFG Securities was quoted as saying “it reflects the belief that the pledged tax cuts, deregulation and other fiscal stimulus is going to be more business friendly and grow profits.”