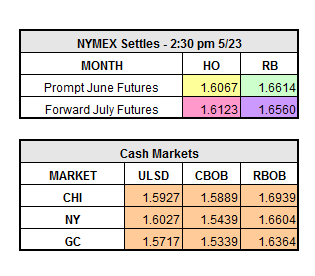 The market was off early Tuesday morning because of President Trump’s proposal to sell half of the U.S. Strategic Petroleum Reserves (SPR) over the next ten years.  That was soon outweighed by the bullish OPEC rhetoric and the realization that the budget proposal has no meaningful impact currently.  The day ended with July WTI closing up $0.34 to $51.47/bbl, June HO closing up $0.0046 to $1.6067/gal and June RBOB finishing down $0.0012 to $1.6614/gal.

This morning the market is getting support from the OPEC meeting in Vienna happening today and tomorrow, as well as the bullish API statistics released last night.  As stated over the past few weeks, OPEC is meeting this week to decide on extending production cuts for another nine months.  Expectations are that these cuts will be extended; OPEC members Saudi Arabia, Iraq, Algeria and non-OPEC member Russia are all in favor of the extension.  The final verdict of what is agreed upon will be out tomorrow afternoon.  The API statistics showed draws across the board. Crude inventories drew 1.5 million barrels, 200,000 barrels coming from Cushing, OK.  Gasoline inventories drew 3.2 million barrels, and distillates drew 1.9 million barrels.

The next piece of news the market was awaiting was the DOE statistics released today at 10:30 a.m. ET.  The DOEs differed from the APIs in that the crude statistics were more bullish, but the refined products were more bearish.  The APIs showed a draw in crude inventories of 4.4 million barrels, with about half coming from PADD III, and 741,000 barrels coming from Cushing.  Gasoline only showed a draw of 787,000 barrels, and distillates only 485,000 barrels.  Right now, these statistics are driving the market; HO is trading down about $0.0025 and RBOB is down about $0.0075.