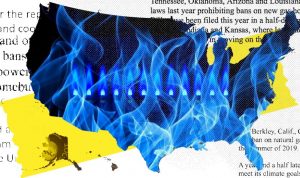 Cities across the U.S. are considering banning natural gas hookups in new construction for both homes and businesses.  Berkley, California passed the first ban in 2019 and other cities like San Jose, New York, Seattle, and Denver are following their lead.

The state of California has some of the highest priced power in the country with prices still climbing.  The average cost of electricity in California is 19.2 cents per kilowatt-hour compared to the national average of 13 cents per kilowatt-hour.  According to Forbes, “On December 3, the California Public Utility Commission approved an 8.1% electricity rate increase for Pacific Gas & Electric.  That increase will cost the average residential customer in PG&E’s service territory an additional $13.44 per month.”[1]  However, blackouts are so common in the state that many residents have purchased generators to combat the issue.

As the natural gas restrictions increase, residents will be more dependent on electricity.  A struggling power grid combined with price increases can only further exacerbate the issues.  Most homes in the state use natural gas for heating and cooking.  The most adversely impacted groups will be low-income residents of disadvantaged communities.  “The bans have ignited a backlash from some of California’s most prominent Black and Latino leaders, who are saying that the prohibitions on the use of the fuel are a form of regressive tax on low- and middle-income residents.”[2]

As a result of the local initiatives, other states are beginning to take action against cities that could possibly pass legislation banning new gas hookups in municipalities.  Arizona became the first state to do so even though no new legislation was proposed at the time. Texas, Tennessee, Oklahoma, Louisiana, and Kansas have all followed suit with Ohio also considering the ban.  Preemptive legislation has become a method that allows states to limit the powers of the local governments.

Natural gas accounts for nearly 40% of electricity in the U.S.  Even if there is a shift in new construction, the building themselves are often powered by natural gas.  While the thought of eliminating natural gas may seem to be an environmentally friendly concept, the opposite may occur.  In new construction, natural gas is piped into a home and burns at a 90% efficiency.  “This means that 90 percent of the energy contained in the natural gas ends as useful heat for the home’s residents.”[3]  If natural gas is being used to fuel a power plant for electric heaters and appliances, only 45% of the energy in it will be converted to electricity.  As the debate rages on between environmental groups, lawmakers, home owners, and utility companies, one thing is certain – moving from a more efficient use of natural gas to less efficient does not make sense for any party involved.