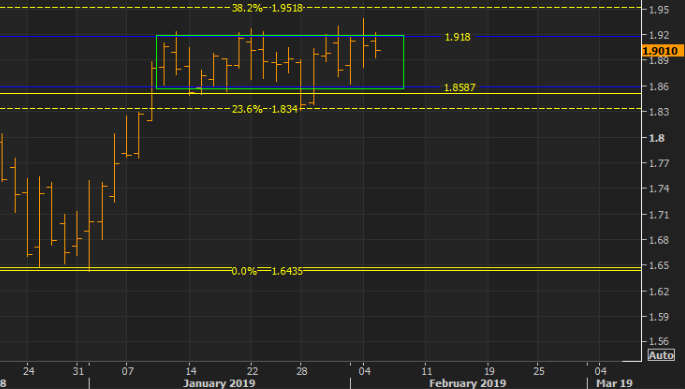 After a sharp rally to begin the year, oil prices have been trading in a tight range over the past two weeks and are waiting for their next cue to determine price direction.

The picture above is the front month ULSD chart dating back to just before the New Year. We saw a ferocious rally from $1.65/gallon to around $1.90/gallon in just two weeks’ time and then staying in that relative area for another two weeks. This rally didn’t even compare to what we saw in the Chicago cash markets where prices increased upwards of $0.40/gallon in the month of January due in large part to the incredible demand surge in distillate heading into last week. Distillate in forms of diesel, heating oil and kerosene were needed to warm the Midwest during the Polar Vortex which had Chicago’s high temperature on January 30th at -9 degrees Fahrenheit. Now that the extreme cold is behind us, many will look to Wednesday’s Department of Energy inventory data to determine the extent to how much stockpiles were drained and the effect on refineries’ output capacity to determine market direction.

Another component that is already having a negative impact on crude oil prices is global and domestic manufacturing data. Reuters reports that the JPMorgan Global PMI indicator dropped to 49.4 in January from 49.7 in December. This indicator has been trending lower for the past 12 months and signals that global growth is slowing, which is bearish for oil prices.

The final component many traders are watching is Venezuelan crude exports amid the protests and potential for escalating conflict as President Nicolás Maduro fights to retain power against Juan Guaidó who is backed by many nations, including the United States. The U.S. has imposed restrictions on Venezuela’s crude exports which aims to redirect revenues to Guaidó. As a result of the power struggle, The Wall Street Journal reports that production is falling due to labor shortages since people are finding it difficult to survive the hyperinflation and delayed payments. Venezuela now needs to find replacement buyers to purchase the 500,000 barrels per day it sold to the United States. If it does not, the lack of crude oil supply on the market will definitely be reflected as bullish for price direction.