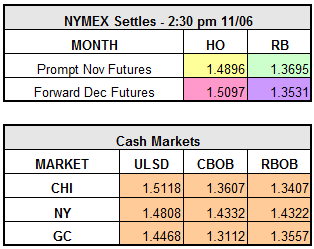 WTI petroleum futures were up significantly early this morning, but more recently slid off once Genscape data came out showing a 1.8mm bbl build on crude at Cushing. Heat and RBOB are currently trading up slightly. Last week ended with a three-day drop in the market; will today end that streak? Downward price pressure was persistent last week despite the U.S. rig count being down (-6) for the 10th straight week, and evidence suggesting that even with a weakened economy, Chinese oil demand has not wavered. The market has been shaking off the bullish headlines and is focused on the abundant inventory levels instead.

The big news in our market stemmed from the Windy City, where the cash market on CBOB and RBOB weakened by 6cts/gal each this past Friday, the first sign of weakness in the Chicago gasoline market since late August. We also saw diesel in Chicago drop 13 cpg last week. Marathon’s refinery in Detroit resumed normal production capacity last week, and BP’s Whiting, Ind. Refinery has been restarting several units. It seems the majority of planned and unplanned outages in PADD 2 have ended.

Last Friday, President Obama denied the proposals to build the Keystone XL pipeline. This pipeline, a proposed 1,179 mile line from the Canadian oil sands to the Gulf coast would have carried 800,000 bpd. This serious policy matter, which has been cited as becoming more of a “campaign symbol” is being fought on two sides. One side is claiming job creation and positive economic growth, and the other is expressing the negative impacts it would have on global climate change; a topic that President Obama has intensified his role in during his last year in office. “From a market perspective, the industry can find a different way to move that oil,” said Christine Tezak, an energy market analyst at ClearView Energy Partners, a Washington firm. “How long it takes is just a result of oil prices. If prices go up, companies will get the oil out.” – NY Times