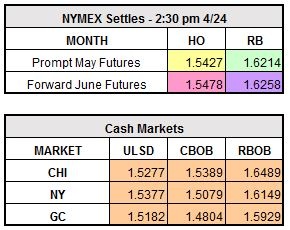 The energy complex is trading mildly lower as comments by Russia seem to make the bulls weary despite a strong two-day rally by global equity markets.

Reuters reported earlier today that Russian Energy Minister Alexander Novak indicated that Russia will wait on the results of the OPEC meeting on May 25th before deciding if it wants to extend production cuts. Many interpret this as bearish for oil because it appears Russia doesn’t want to make a concerted effort to balance the oil market since its production is ballooning. Russian officials reported just yesterday that production output could hit its highest in 30 years if an extension of the cut is not made. That comment has put oil bulls on edge.

Reuters also released expectations for tomorrow’s inventory report. Crude is expected to draw 1.3 million barrels as many refineries are exiting turnaround season and beginning to seasonally draw down crude stocks. It looks like the bearish Russian comments and bullish physical state of the market could make crude trade in a range until the OPEC meeting takes place…I feel like this has been said for the past 18 months.

The dollar index is now trading at a 5 month low after the Euro surged following the first round results of the French election Sunday night. This has in turn boosted U.S. equities as the Nasdaq is trading at all-time highs. One would think that these two factors would have crude trading higher today, but again, the bears seem to be in charge as WTI trades comfortably below $50/barrel.