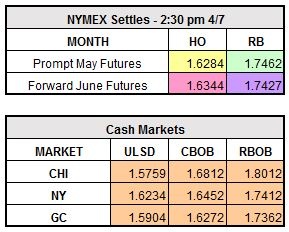 The oil market appears to be in a risk premium mode as we trade higher Monday. The Syrian situation continues to keep sellers on edge as they await if there is increased turmoil. And now yesterday, the Sharara oil field in Libya was once again shutdown after a group impeded pipeline shipments.

Oil climbed Monday morning even after traders had the weekend to digest the U.S. bombing on a Syrian airfield this past Thursday night. Reports indicate Syrian President, Bashar al-Assad, has already launched aircraft from the attacked airfield, as a stern gesture to the United States. The Russians, allies of the Syrian regime, moved a Black Sea naval group to the Mediterranean as we appear to moving to a classic “tit for tat” in escalated political responses. Speaking of political responses, the U.S. moved the Carl Vinson naval strike group to the Korean Peninsula as a message to North Korea. This comes as speculation builds that North Korea may test a missile with nuclear capabilities on April 15th, to commemorate the state’s founder, Kim Il Sung.

The Middle East tension is also building in Libya once again. Bloomberg reports that the country’s largest oil field, Sharara, stopped producing yesterday, just a week after it reopened from previous turmoil. This will cut production by as much as 200,000 barrels per day.

Even though these are the two driving factors behind the rally, traders are also referencing comments by the Kuwait oil minister. According to Reuters, he expects OPEC production cut compliance for the month of March to “be higher than the previous couple of months.” Traders will be looking towards the next OPEC meeting in May.