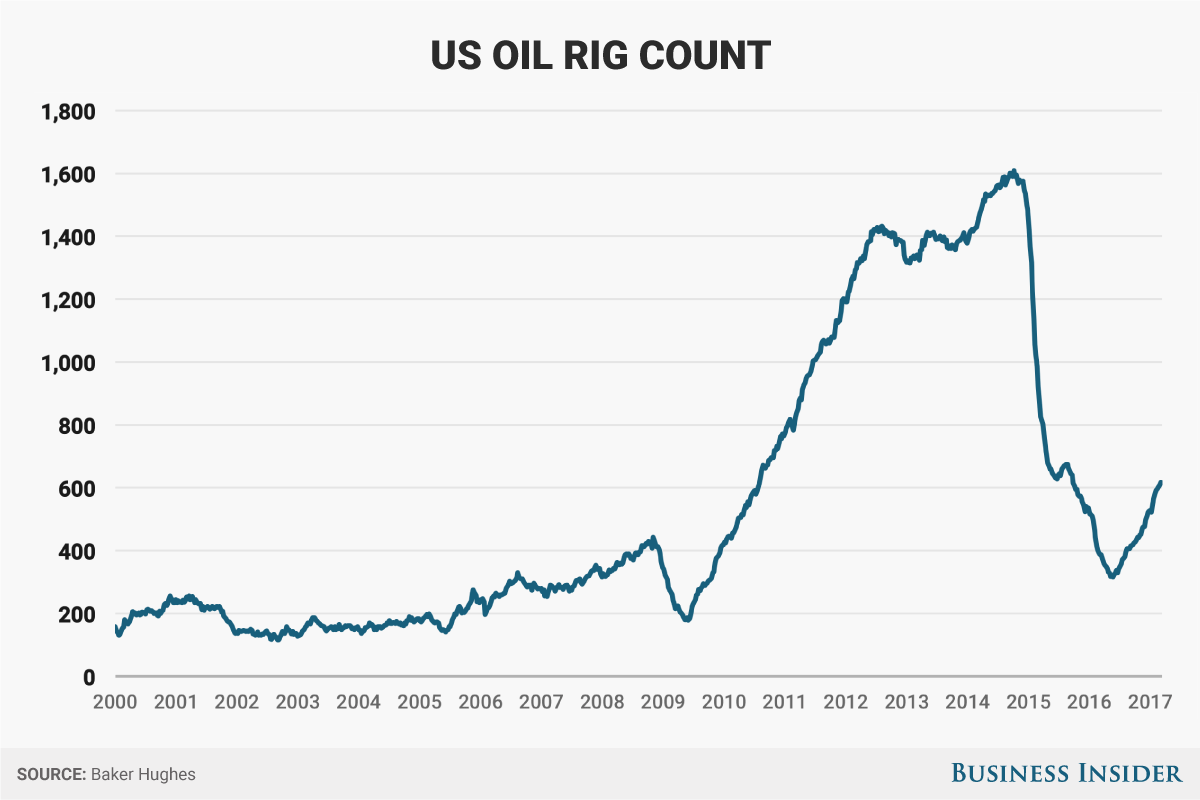 As we start this new week at almost the midway point of March, there is a lot going on. The main focus falls upon U.S. Shale vs. OPEC.  There was a jump in the rig count for the eighth straight week.  Total rig count is the highest since September of 2015.  U.S. drillers have activated eight new rigs, which bumped up the total oil rig count to 617 and increased gas wells by five to a total of 151. To put this into perspective, at this point last year, there were 386 oil rigs in operation.  This is going hand in hand with the data the DOE sent out last week.  The data showed that U.S. supplies rose last week by 8.21 million barrels to a total of 528.4 million barrels.  Since the beginning of record keeping with DOE statistics, this would be the highest increase ever reported.

With a downturn in crude futures, following the DOE stats last week, why did the rig count go up this past week? The answer is that decisions made to activate these rigs come months in advance when prices make sense to ramp up the drilling.  Marathon Oil said last week that it will be spending $1.1 billion for roughly 70,000 acres in the Texas Permian basin and will increase spending by adding another drilling rig.  This comes on the heels of Exxon Mobil and Pioneer Natural Resources Co committing significant money in the Permian Basin.  The main factor that draws everyone into the Permian is that it is currently one of the cheapest areas to drill in the U.S.  The Permian Basin accounts for roughly two-thirds of the rig count growth over the last ten months.  Reuters reports, “Additionally, U.S. shale oil producers said this week at the CERAWeek conference in Houston they are plotting ambitious production growth outside the red-hot Permian.  Drillers like Hess Corp, Chesapeake Energy Corp, Continental Resources Inc. and others said at the conference they were planning to expand in North Dakota, Oklahoma and other shale regions.” So how does the rest of the oil industry feel about the U.S. ramping up nearly all operations and future production growth? The Saudi Arabian energy minister has been reported as saying that the U.S. will see no “free rides” at the expense of OPEC’s production cut price upturns.  Currently there are already murmurings of how the current and forecasted U.S. production growth is jeopardizing the extension of OPEC’s cuts through the second half of the year.  Although Russia has not adhered to the cuts it was claiming it would make, that did not stop one of Russia’s largest producers from saying that “rising U.S. output is the main threat to the global output deal.”  Whether or not OPEC will continue to cut production over the second half of 2017 remains to be seen.  As time ticks on and U.S. production continues to rise, it is clear to see we could be heading towards a price scuffle that could reverse all the progress that was made when OPEC cuts were first announced.  The saga continues.