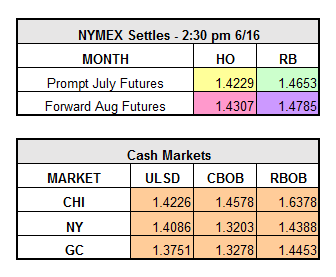 After a big drop in prices across the board yesterday, one might wonder why the market is seeing such a big rebound today.  For starters, DOE stats seemed to be overlooked yesterday, while today people are going back to statistics for guidance. Yesterday in the news, “The Brexit debate” (i.e., should Britain leave the EU) caused violence, as a pro-European Union lawmaker was shot to death. This forced campaigns to go on hold, leaving market analysts with little direction for what will happen next.

As of now, it appears that there is more support for Britain staying in the EU, but only time will tell once the voting has commenced. The thing that nobody knows for sure is what will happen to the global economy if one of the most influential nations (Britain) decides to leave.

Some analysts believe that Britain leaving the EU would have little to no effect on oil prices directly, but could influence them indirectly. For example, if Britain leaves the EU, it is possible that there will be a lot of uncertainty regarding the Euro and the British Pound. In turn, this could push investors to have more faith in the dollar, thus strengthening the dollar. As we know, a strong dollar typically equates to weaker oil prices.

On a side note: