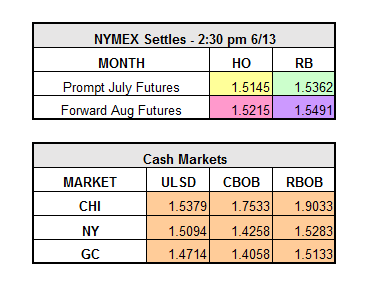 OPEC believes that the second half of 2016 will be much tighter than expected. OPEC reported that “China’s output is expected to increase by 60,000 b/d and production in Brazil is expected to increase by 270,000 b/d due to the start-up of two new projects. In the U.S., despite higher growth in the Gulf of Mexico, total U.S. output will decline by 150,000 b/d in the second half of the year compared to the first half of 2016. With the recovery of production disrupted by wildfire, supply in Canada is expected to grow by 60,000 b/d compared to 1H16.” OPEC noted that the above projections show that “the excess supply in the market is likely to ease over the coming quarters. To some degree, this has started to be seen in the slowing pace of inventory builds in U.S. commercial crude stocks.”

A bit of a contradicting statement if you ask me. Recovery of production disrupted by the wildfires screams “inventory build!” In defense of OPEC’s opinion, there are non-OPEC producers that have dramatically cut back on production due to the 2016 price drop, while OPEC has not cut back. The slowing pace of U.S. inventory builds is likely due to the Canadian wildfires and rising demand across the country because of driving season. There seems to be a rebalancing act that OPEC is informing us about. While some countries increase their supply and production per day, others are struggling due to geopolitical and environmental issues.

OPEC is onto something here. Even though its assumption of excess supply in the market is likely to ease over the coming quarters sounds broad and vague, the price of crude has been fluttering around $46-$51 a barrel for the past month. Looking back at early April into May, the spread was around $35-$46 a barrel. We have witnessed a sharp rise in pricing and draws in inventory while also witnessing a rebalancing act of refined products and crude for the past month.