As discussed in yesterday’s post, EIA data showed a crude draw of 5.2 million bbls and a build of 2.5 million barrels in gasoline.  To go hand in hand with the crude draw, the Midwest saw the largest regional decline, as PADD II drew by nearly 3.5 million bbl, with Cushing responsible for nearly 1.6 million of the drawdown.  Going back to the end of April, when inventories were peaking, the U.S. crude reserves have plummeted to a level of approximately 43.4 million bbl.  This drop-off in crude stocks can be directly attributed to the loss of 912,000 bpd in comparison to last week, which has lowered U.S. imports to 6.47 million bpd.  As a country we have not seen a level this low since all the way back in November of 2015.

One of the principal contributors to today’s market reversal is Nigeria cutting the price of all crude products that it sells. According to Mele Kyari, a general manager for the oil marketing division at NNPC, a “huge cargo overhang” has caused Nigeria to decrease price by a minimum of $1 a barrel to 20 out of 26 oil grades that are monitored by Bloomberg.  This is a desperate attempt by the Nigerians to regain oil market share in the midst of the glut of cargoes.  Like every other oil producing country, Nigeria is trying to deal with oil prices being half of what they were in July of 2014.

With imports decreasing and refineries waning, due to crude runs hitting their lowest levels since 2013 (dropping 182,000 bpd), we are seeing a bearish outlook on the market and, as most are hoping, a possible rebalancing of the market.

So is this rebalancing of the market looking promising? We have seen this oil market gain strength since the last informal OPEC meeting, but it is all teetering on unsubstantiated facts.  Depending on how the OPEC meeting goes next month, we could see two possible scenarios.  Scenario one: an OPEC freeze/cut happens and we see continued price growth..  Scenario two:there is no deal made, OPEC and non-OPEC members flood the market with product and we see a weakening of the price per barrel to less than $40.

In closing, back in 2001 OPEC struck a deal, similar to the one we are currently speaking about, which put in place a supply cut. How did that turn out?  Russia said it was on board with the plan and then increased exports behind the backs of the OPEC party.  With Nigeria, Libya and Iran all wanting exemptions from this deal, it is becoming less and less likely we see any significant agreement occur next month. 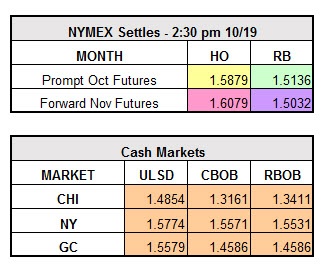